Showing posts from 2016
Show all

The reporter who saved a guy and caught crap for it 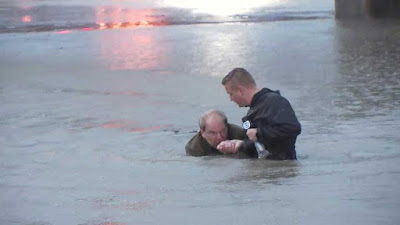 Campion assists the man from a safer depth. (KTRK) KTRK reporter Steve Campion ended up doing a lot more than his day job during flooding in Houston-- he saved a man's life in the middle of a live broadcast. If you haven't seen the video, go watch here . It's really something. And yet, somehow, the internet has found it to be very important that Campion be shamed for his tone w hile rescuing the man. Campion hollered to the man to swim from his sinking car. The video shows that the victim began to understand Campion's instructions and eventually did begin to swim-- a move that may well have saved his life. But numerous bloggers (apparently self-appointed experts in swift water rescue) couldn't help but remark that Campion seemed "annoyed" during the rescue. Indeed, Campion does seem flustered while yelling back and forth with the confused driver, who had trouble understanding Campion's advice to abandon his sinking car. The victim
8 comments
Read more
More posts