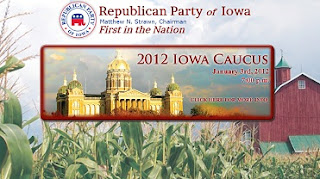 The week is almost over and it's about time to get packing for the big trip to Des Moines, where the weather is supposed to be lovely next week.
It's an exciting trip because 9NEWS photojournalist Brian Willie and I will get a front-row seat to the start of what promises to be a very crazy 2012 election cycle.

It's anybody's guess what's going to happen, but it's starting to look like the buzz could be over who comes in third in Iowa.

Polls show Mitt Romney and Ron Paul solidly ahead of the rest of the pack, but conservative Republicans have been splitting so far between several candidates.

Colorado GOP voters will do the same thing on Feb. 7, so these first contests will be critical in helping determine who looks like they have what it takes to win.

We'll be landing in Iowa on Monday.