October 20, 2015
It flashes by so quickly, most TV viewers in Colorado might not give it a second thought.

Cam the Ram, the mascot for Colorado State University athletics, appears on screen for two seconds of a 30-second political ad asking voters to vote in favor of extending a tourism tax to benefit the area around the National Western Stock Show complex.

He's there because CSU stands to gain a new Agricultural facility as part of the master plan that ballot question 2C would help to fund.

While working on a Truth Test of the ad for 9NEWS on Monday, I wondered how it came to be that CSU would participate in a political ad this way.

In similar circumstances, local school district officials are loathe to appear as though they are campaigning in favor of bond issue questions, even if they think the measures are vital.

So, we asked CSU what made it okay to use Cam on camera.

"In August, the CSU Board of Governors approved [a] resolution in support of the tourism ballot measure," said university spokesman Mike Hooker. "Because of that official action of support by the board, the university approved the use of CAM in the video."

The resolution cites a specific Colorado law, which states that agencies are not prohibited from "passing a resolution or taking a position of advocacy" on ballot issues.
Sources familiar with school district bond issues told me that school boards tend to turn over advocacy for their bond measures to independent committees, who are allowed to raise funds for campaign purposes.

In this case, an outside group is also doing the campaigning for the ballot question. CSU simply allowed its mascot to appear in the ad.

It's a tricky business, though. Even when it's perfectly legal, sports mascots have to be careful not to upset fans-- remember when the Nuggets mascot Rocky made an "unsanctioned" appearance at an GOP rally with Mitt Romney and gubernatorial candidate Bob Beauprez?

With much less of a partisan edge, it's doubtful that Cam's appearance would rile too many fans here-- and CSU does stand to gain if the plan at the stock show complex moves forward.

In its resolution, the board of governors states that CSU plans "an equine sports medicine clinic, a water resources center, and a collaborative education and research center, and CSU's programs and facilities at the Fort Collins campus would provide support to and integration with those activities at the National Western Center."

But if the ad made you go, "hmm," now you know how it happened. 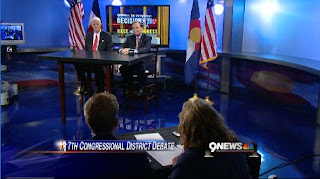